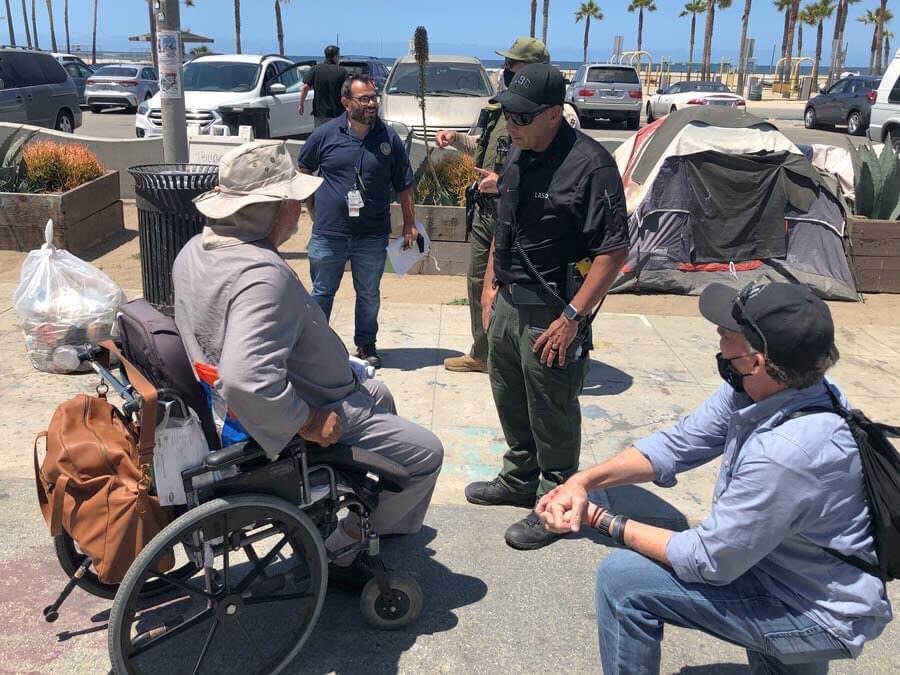 Bonin, who represents Venice in the Los Angeles City Council, tweeted that Sheriff Alex Villanueva “should leave outreach & housing to the professionals. It’s harmful to strut in & interfere with the work of service providers who are trying to house people, quietly, diligently and in good faith.”

Bonin’s response on Twitter attached an interview by Spectrum1’s Kate Cagle with a Vietnam War veteran named Robert, whom Villanueva had cited as a success story of the deputies’ presence in Venice. Robert told Cagle that he was dropped off at the Veteran’s Affairs building by deputies, but had to sleep in his wheelchair overnight after deputies discarded his belongings.

The sheriff’s department responded that it is not responsible for housing people, but that deputies had connected Robert to service providers. Robert told Cagle that the providers he was put in touch with “had nothing at all …. didn’t know anything about it all. They knew nothing about any housing, nothing about anything.”

Bonin responded on Twitter to Robert’s story, saying “the key to housing people is building trust. It is hard to do that while conducting outreach and casework with cameras in tow, while wearing firearms, and while threatening to make arrests.”

The councilman also noted that the Venice Encampment to Home program has housed or sheltered more than three dozen people since beginning its work last month.

Villanueva, who described the department’s work in Venice as a “humanitarian mission,” told reporters on Monday that deputies will talk to people residing in an encampment at the beach to determine what they are doing to move from being homeless to having a place to stay. He said the homelessness crisis within Los Angeles city limits prompted him to take action. He also accused Bonin and Mayor Eric Garcetti of hampering the Los Angeles Police Department in its ability to do its job with regard to encampments.

“I’m not going to blame LAPD whatsoever,” Villanueva said. “I think they can definitely do the job. They’re more than capable, have good leadership. However, if they’re hamstrung by politicians that don’t want them to do their job, well, then they’re left in a very, very bad situation.”

He visited the Venice encampment this week “to view the failures of local politicians in regard to the homeless crisis,” he said, adding that the agency’s Homeless Outreach Services Team would be dispatched to the beach Tuesday “assessing Venice in order to triage the crisis and develop an action plan to compassionately offer services while employing common sense in the regulation of public space within Los Angeles County.”

He told reporters he would like to see the Venice Beach encampment cleared by the Fourth of July holiday.