Villanueva denies cover-up allegations, attacks political rivals and reporter
The Votes Are In!
2021 Readers' Choice is back, bigger and better than ever! 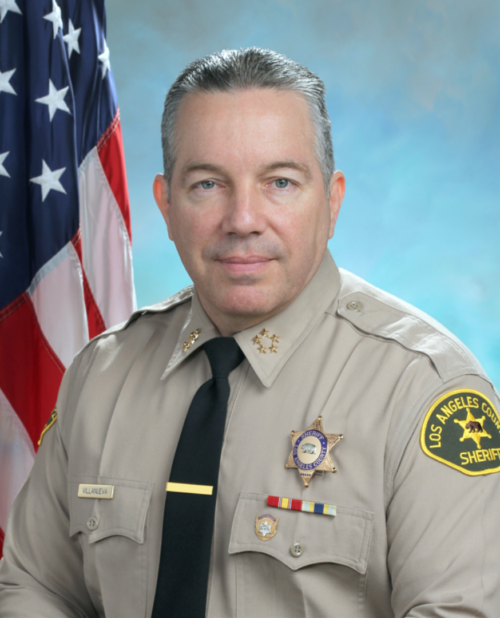 A defiant Sheriff Alex Villanueva on Tuesday again flatly denied being engaged in any cover-up effort involving a violent encounter in which a deputy knelt on the head of a handcuffed inmate for three minutes, and said he is conducting a criminal probe into the reporter who broke the story.

Villanueva, in a downtown news conference, denied all allegations contained in a damage claim filed against the county this week by one of his commanders, who asserts the sheriff was made aware of the incident involving the handcuffed inmate days after it occurred and lied when he claimed not to have seen video of the altercation until months later.

The sheriff blasted the claim Tuesday, calling it part of what he alleges is an orchestrated attack involving an election rival, the county’s inspector general and even a Los Angeles Times reporter — saying he is conducting a criminal probe into all of them to determine who leaked the reporter surveillance video of the altercation.

“So the foundation of this entire lawsuit (claim) is false,” the sheriff said. “Everything in this lawsuit is false.”

In the damages claim, which is a precursor to a lawsuit, Cmdr. Allen Castellano contends that Villanueva and at least three other agency executives saw the surveillance video within days of the March 10, 2021, incident, and the sheriff said he would “handle the matter,” noting that the department did “not need bad media at this time.” Castellano said concerns were raised about the video of the altercation due to its similarity to the death of George Floyd, who died after a Minneapolis police officer knelt on his neck for more than eight minutes, sparking national protests.

The altercation, which was first reported by the Los Angeles Times, occurred at the San Fernando Courthouse, where a 24-year-old inmate named Enzo Escalante allegedly punched sheriff’s Deputy Douglas Johnson in the face. Johnson and other deputies wrestled Escalante to the ground, with Johnson putting his knee on the inmate’s head.

Security video of the altercation shows Johnson keeping his knee on Escalante’s head for three minutes after he was handcuffed and did not appear to be resisting.

After the incident, Castellano wrote an internal report suggesting that officials within the department tried to suppress details and video of the altercation, “given its nature and its similarities to widely publicized George Floyd use of force.”

In his new legal claim, Castellano claims that Villanueva orchestrated an effort to cover up the video, and later took retaliatory action against people in the department who raised questions about that effort or challenged what the commander called an attempt by the sheriff to change the timeline of when he first viewed the video.

Villanueva last month denied that he was involved in any type of coverup, insisting that he did not see the video until November, when he immediately ordered that the deputy involved be relieved of duty and that a criminal investigation be initiated.

The sheriff conceded that an internal criminal investigation should have been started immediately after the incident, concurrent with an administrative probe, but it didn’t happen — something he blamed on errors in judgment by others in the department.

Villanueva reiterated that timeline Tuesday, again denying any type of cover-up or retaliation.

“When it comes to cover-ups or whistleblowers, I don’t see what was covered up or what whistle was blown, because that’s a mystery,” he said.

County Undersheriff Tim Murakami — who is also alleged in the claim to have seen the video days after the incident in March 2021 — also denied the allegation.

Castellano contends in his damages claim that despite the sheriff’s assertion that the deputy involved was relieved of duty in November, that actually didn’t happen until Dec. 7. Castellano also claims he was subjected to an internal investigation after raising concerns about the handling of the matter and was reprimanded for lapses in how the case was handled, despite his insistence that he brought the case to the sheriff’s attention within days.

Villanueva used his news conference Tuesday to blast a variety of his political opponents, including election challenger Eli Vera, county Inspector General Max Huntsman and Los Angeles Times reporter Alene Tchekmedyian, who broke the story of the altercation involving the handcuffed inmate. Villanueva went as far as to allege collusion among the various players, all designed to derail his re-election bid.

“When you take this entire thing into context you realize that there’s a lot of people working in concert and coordination,” he said. “That includes the LA Times. That includes people that obviously want to defeat me electorally. That includes the (Board of Supervisors)-appointed inspector general and the (Civilian) Oversight Commission. A lot of people working overtime and they’re doing it as best they can, so there’ll be more of this nonsense thrown at me until June 7, but it is what it is.”

“Sheriff Alex Villanueva’s attack on Alene Tchekmedyian’s First Amendment rights for doing newsworthy reporting on a video that showed a deputy kneeling on a handcuffed inmate’s head is outrageous,” Merida said. “His attempt to criminalize news reporting goes against well-established constitutional law. We will vigorously defend Tchekmedyian’s and the Los Angeles Times’ rights in any proceeding or investigation brought by authorities.”

“As the individual who reported this truth to the inspector general, I’m infuriated to see Villanueva double-down on his lies to cover up his criminal activity,” Vera said.

Los Angeles County Supervisor Hilda Solis issued a statement saying she is calling on the state attorney general to investigate Villanueva for a “pattern of unconscionable and dangerous actions like the one today,” referring to the sheriff’s penchant for calling news conferences with county resources to lash out at political foes.

“The latest attack on LA Times reporter Alene Tchekmedyian is another dangerous example of Sheriff Villanueva attacking the media and the First Amendment,” Solis said. “This is in keeping with his past harassment of other women, including KPCC reporter Josie Huang as well as myself and other county officials.

“Displaying Alene’s photo at today’s press conference and making her appear as if she committed a crime is not just an attack on Alene but the entire journalistic community. What’s criminal is the sheriff’s cover-up of deputies using excessive force against an incarcerated person, including kneeling on his neck for three minutes. What’s not criminal, however, is Alene and other journalists reporting on it.”