Family plans vigil at site of deadly LA crash in Windsor Hills
The Votes Are In!
2021 Readers' Choice is back, bigger and better than ever! 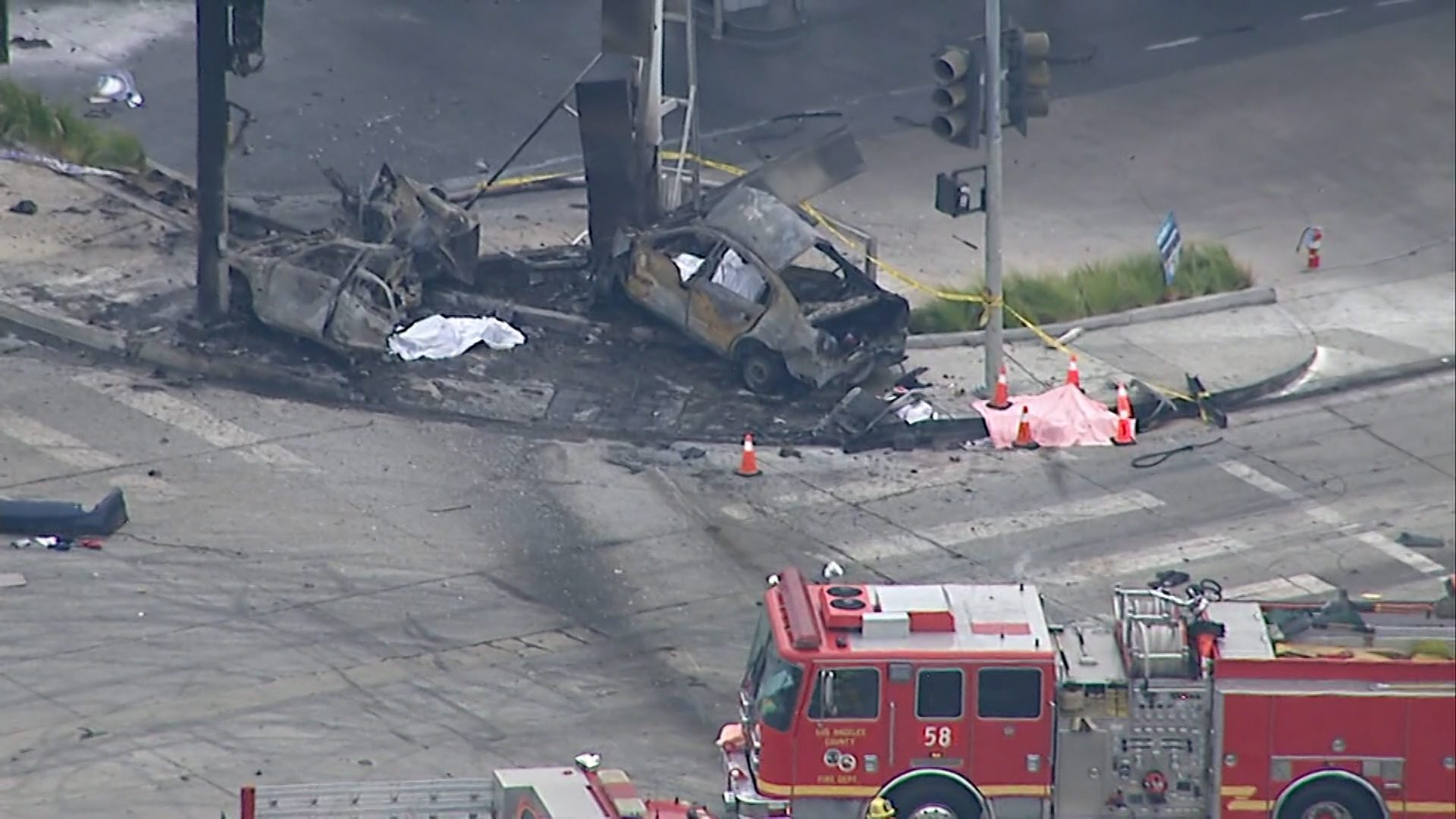 Multiple victims, including an infant and unborn child, were killed and injured in a multivehicle collision in South LA. | Photo courtesy of NBC Palm Springs
by City News Service Inc.
share with

The family of a woman who was killed and burned beyond recognition in last week’s horrific crash in Windsor Hills that also left five other people dead will hold a candlelight vigil at the site Thursday evening.

Relatives of Nathesia Lewis, 43, plan to gather at La Brea and Slauson avenues at 5 p.m. to mark the one-week anniversary of the horrific crash. Lewis has not been formally identified as a victim by the coroner’s office, but relatives said she was killed in the chain-reaction crash allegedly caused by a traveling nurse accused of speeding into the intersection through a red light at nearly 100 mph.

Fox11 reported that the other still-unidentified victim of the crash was 38-year-old Lynette Noble — who was a friend of Lewis and was in the same car with her when the crash occurred. The coroner’s office also has not officially identified her as a victim.

Lewis’ relatives told Fox11 Wednesday they only discovered days after the crash that she had been killed.

On a GoFundMe page, Jasmond Nelson wrote that Lewis, her sister, had six children ranging in age from 2 to 23, along with a year-old grandchild. The page had raised more than $3,600 as of Thursday afternoon.

The four other victims of the crash have been previously identified by the coroner’s office as 23-year-old Asherey Ryan of Los Angeles, who relatives said was 8 1/2 months pregnant. Her unborn child, Armani Lester, also died in the crash and is considered a victim, along with Ryan’s 11-month-old son Alonzo Quintero and 24-year-old boyfriend, Reynold Lester of Los Angeles.

They were all in one car, traveling to a pre-natal doctor’s appointment for Ryan, relatives said.

The woman accused of causing the crash, 37-year-old Nicole Lorraine Linton, remains jailed without bail. She was charged Monday with six counts of murder and five counts of vehicular manslaughter with gross negligence. Los Angeles County District Attorney George Gascón said his office could not file a manslaughter charge in a case involving an unborn child.

Linton is due back in court Monday for a bail-review hearing, and her arraignment is set for Oct. 26.

One of Linton’s attorneys, Halim Dhanidina, told the judge that the defense is conducting an investigation into “mental health issues,” and said he didn’t believe there was anything to justify treating Linton’s case equivalent to a capital murder case. He said she could reasonably post $300,000 bail.

Deputy District Attorney Brittany Vannoy had urged Superior Court Judge Natalie Stone to order Linton jailed without bail, saying that the defendant is accused of “traveling at an excessive speed” and proceeding through the intersection “despite being faced with a red light.”

The judge said Linton is potentially facing a very lengthy sentence if she is found guilty, noting that Los Angeles is not the woman’s home base or primary residence.

Linton could face up to 90 years to life in state prison if convicted as charged, according to Gascón.

Linton was arrested Friday while she was still hospitalized for moderate injuries sustained in the crash, according to the California Highway Patrol. She was released from Ronald Reagan UCLA Medical Center last weekend.

CHP officials said Linton — a traveling nurse from Houston who was working locally at Kaiser Permanente West Los Angeles Medical Center — plowed her Mercedes-Benz into the intersection through a red light while driving at high speed southbound on La Brea around 1:40 p.m. Aug. 4.

“While driving the Mercedes, Linton proceeded through a red light and collided into multiple vehicles traveling eastbound and westbound on Slauson Avenue,” according to the CHP. “As a result of this collision, multiple parties were ejected and two vehicles were fully engulfed in flames. Following the collision, involved parties were transported to (Ronald Reagan UCLA Medical Center) by ambulance and six individuals were declared deceased on scene,” the CHP continued.

CHP reported that eight vehicles, including Linton’s, were involved in the collision.

Eight others were injured in the collision, including seven occupants of a Chevrolet Traverse. The 33-year-old driver, a 1-year-old boy and three teenagers suffered moderate injuries, while two other teens inside the vehicle had only minor injuries.

The eighth victim — the 19-year-old driver of an Audi A3 — also suffered minor injuries.

A GoFundMe page established on behalf of Ryan’s family had raised nearly $167,000 as of Thursday afternoon.