Hey SoCal. Change is our intention. - Last of 40 cows that escaped from slaughterhouse found in South El Monte
Vote for your favorite business!
2021 Readers' Choice The voting period is open for 41 days (April 27, 2021 to June 7(extended), 2021) 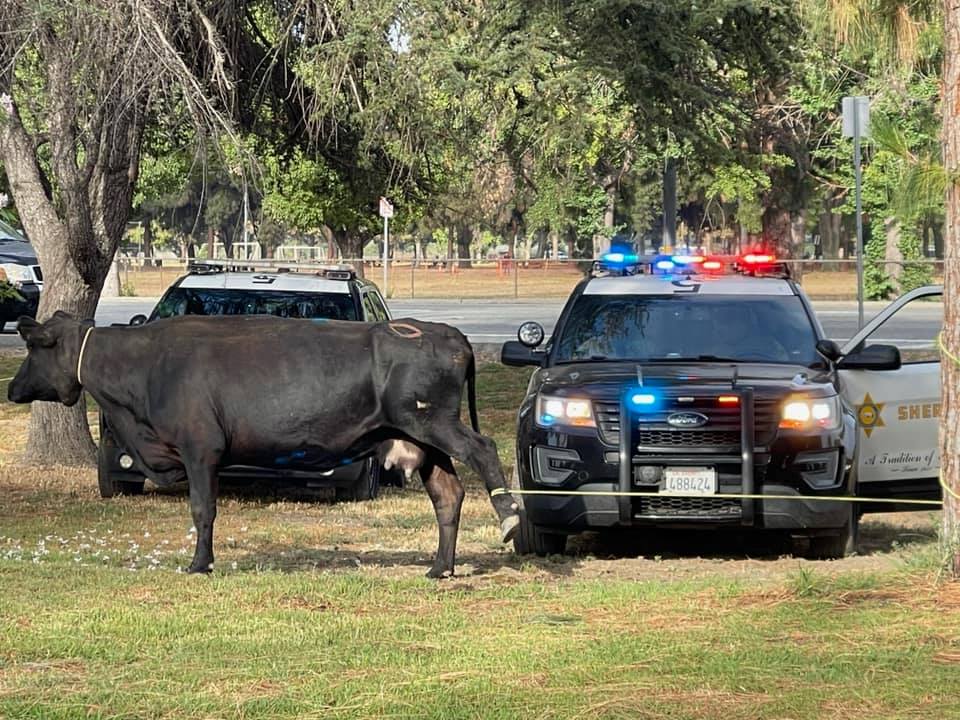 The last of 40 cows that escaped from a slaughterhouse in Pico Rivera was found Thursday in a South El Monte-area field, and city officials said the animal’s life will be spared thanks to Grammy- winning songwriter Diane Warren.

Shortly after 4 a.m., sheriff’s officials received a call from someone who had spotted the cow, and deputies managed to find it about 6 a.m. near Rosemead Boulevard and the Pomona (60) Freeway. It was the last of 40 cows that escaped around 7:30 p.m. Tuesday, when the Los Angeles County Sheriff’s Department’s Pico Rivera station received a call of cows running loose on city streets.

Sheriff’s officials said an open gate had allowed the cows to flee the Manning Beef slaughterhouse in the 9500 block of Beverly Road. The cows were on the loose for hours, roaming through residential neighborhoods and evading capture.

One of the cows charged a family of four, knocking some of them to the ground, according to the sheriff’s department. The family members were taken to a local hospital, where they were treated for minor injuries.

“To protect the family from further injury, a Los Angeles County Sheriff’s deputy shot and killed the animal,” according to the department.

No further injuries were reported, and all of the other cows have now been recaptured.

A leading animal rights group on Wednesday expressed sorrow at the animals’ recapture.

“PETA wishes the cows who escaped from a slaughterhouse into a Pico Rivera, California, neighborhood on Tuesday had made it to freedom, something they fought hard to gain, instead of being rounded up and returned to the slaughterhouse or — in one cow’s case — being shot on the scene by law enforcement,” according to a PETA statement.

“These cows’ desperate bid for freedom should have been recognized by moving them to a sanctuary, where they could have bonded with other rescued cows, nursed their calves in peace, and lived out their lives just as you and I hope to do,” PETA President Ingrid Newkirk said. “PETA invites anyone who cheered their escape or mourned their deaths to extend that compassion to all cows — and all other animals — by going vegan.”

PETA will get its wish when it comes to the cow recaptured on Thursday. According to the city of Pico Rivera, Grammy-winning songwriter Diane Warren has come forward to “facilitate the freedom” of the cow and will “work with local sanctuaries” to find the animal a home.

Pico Rivera City Manager Steve Carmona said the city has been talking to the owners of Manning Beef about possibly moving all of the escaped cows to a sanctuary. But he said Warren plans to arrange for the most recently recaptured animal to be relocated to Farm Sanctuary in Acton.

According to Carmona, the cow will have to be tested by state Food and Agriculture officials to determine it is free of disease before it can be moved to the sanctuary.