Hey SoCal. Change is our intention. - El Monte mourns 2 dead officers as investigation continues
The Votes Are In!
2021 Readers' Choice is back, bigger and better than ever! 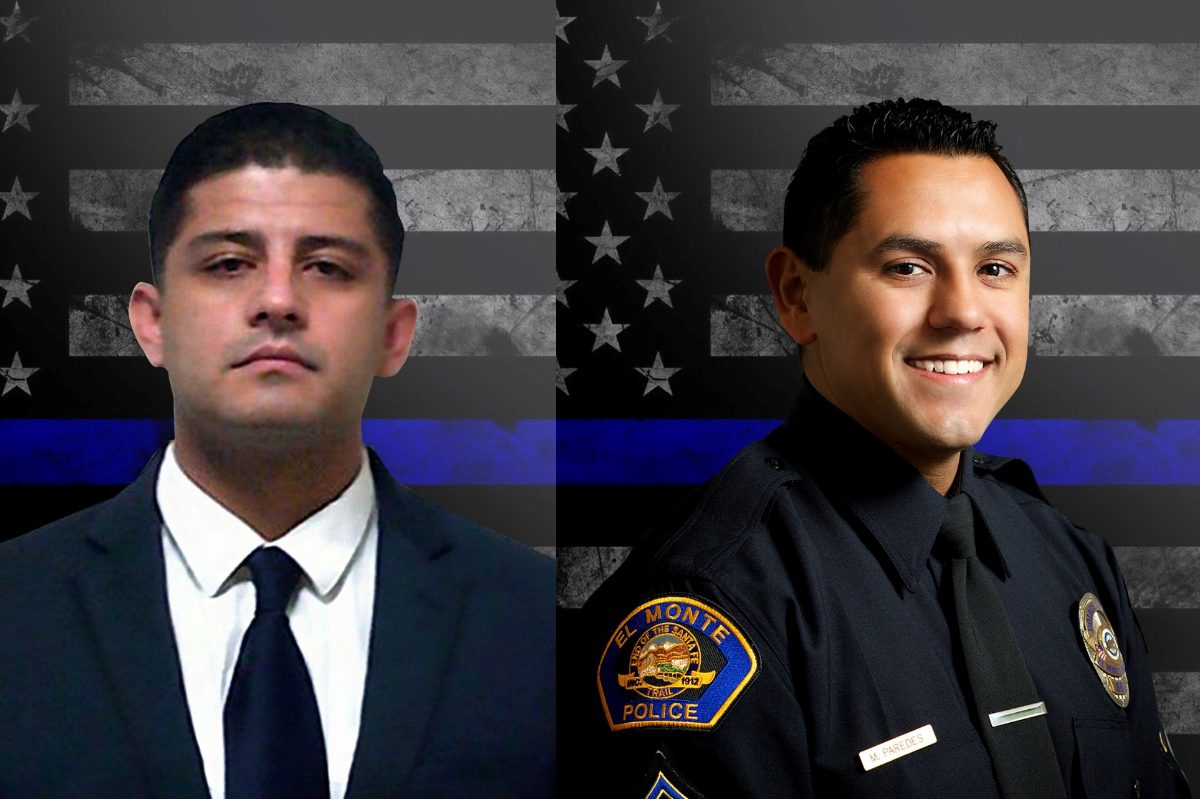 Two police officers who were fatally shot when responding to a stabbing report at an El Monte motel were identified Wednesday, while a memorial of flowers and tributes continued to grow outside El Monte Police Department headquarters and investigators worked to piece together the circumstances of the shooting.

The shooting, which also left the suspect dead, occurred about 5:10 p.m. Tuesday at the Siesta Inn at 10327 Garvey Ave., near the San Bernardino (10) Freeway, according to the Los Angeles County Sheriff’s Department, which was assisting El Monte police with the investigation.

The Los Angeles County coroner’s office and the city of El Monte on Wednesday afternoon identified the slain officers as Joseph Anthony Santana, 31, and Michael Domingo Paredes, 42, both of Upland. City officials said both were married fathers, and both were raised in El Monte.

The coroner’s office had not released the name of the suspect as of Wednesday afternoon, but he was identified in media reports as 35-year-old Justin William Flores.

“It is with heavy hearts that the city of El Monte and the El Monte Police Department announce the passing of Corporal Michael Paredes and Officer Joseph Santana,” according to a city statement.

“Corporal Paredes and Officer Santana were killed in the line of duty … while faithfully carrying out their sworn duties. Both officers responded to a possible stabbing at the Siesta Inn where they were immediately taken under gunfire. The two police officers were transported to LAC-USC Medical Center where they succumbed to their injuries,” the statement said.

“Corporal Paredes and Officer Santana were both raised in the city of El Monte and had a strong connection to the community they served.”

According to the city, Paredes began as an EMPD cadet and was sworn in as a full-time police officer in July 2000. He is survived by his wife, daughter and son.

Santana spent six years working for the city’s Public Works Department, then worked for three years as a San Bernardino County sheriff’s deputy. He joined the El Monte Police Department last year. He is survived by his wife, daughter and twin boys.

“Corporal Paredes and Officer Santana paid the ultimate sacrifice, while in performance of a noble profession, serving the community they loved,” according to the city.

Police recovered a firearm at the scene of Tuesday’s shooting, said Deputy Brenda Serna of the Sheriff’s Information Bureau.

Sheriff’s Lt. Andrew Meyer said the officers went to the motel in response to reports of a stabbing and came under fire when they attempted to make contact with the suspect inside a room. The suspect then ran from the motel into a parking lot, where a second shooting occurred, and the suspect was killed.

The Los Angeles Times first identified the suspect as Flores, citing his mother, Lynn Covarrubias. An unnamed source from the District Attorney’s Office told the paper Flores was on probation in a weapons case.

According to court papers reviewed by The Times, Flores was originally charged last year with being a felon in possession of methamphetamine, a handgun and ammunition. Flores, who had a prior burglary conviction, pleaded no contest in February 2021 to being a felon in possession of a firearm, and under his plea deal, he received two years of probation and 20 days in jail, avoiding a possible three-year prison term, the paper reported.

He was scheduled to appear in court later this month for an alleged probation violation, according to The Times.

Covarrubias told the paper her son and his wife, who had a 7-year-old daughter, were separated but would often stay at the Siesta Inn. She said she did not know who was with her son at the motel on Tuesday.

El Monte Mayor Jessica Ancona said during the news conference, “Heartbroken doesn’t begin to express the loss that we feel.”

“They were acting as the first line of defense for community members when they were essentially ambushed while trying to keep the family safe,” Ancona said.

El Monte City Councilwoman Maria Morales posted on Facebook, “They went to work today to protect the people of our city and to answer the call for help. Sadly, their selfless acts of service led them to a place of evil and they were taken from us in a senseless act of cowardice.

“As a city official and, more importantly, as a mother, I can only imagine the pain and suffering their families are now enduring. I want them to know that I and the people of El Monte grieve with them during this dark moment.”

Investigators combed the area of the shooting into the night Tuesday searching for evidence, witnesses and surveillance video. The Times reported that investigators interviewed a woman, described as the suspect’s girlfriend, who was in the hotel room with him, noting that she had not been stabbed.

The city of El Monte, El Monte Police Department and El Monte Police Officers Association released a joint statement expressing their sympathy: “There are no words to describe our grief and devastation by this senseless act as we learned about the passing of two of our police officers. It weighs heavy on our hearts and we are sending our support to their families.

“We would also like to thank the El Monte community and our surrounding government agencies for the outpouring support we have received in the last few hours.”

A memorial of flowers and tributes quickly formed outside the El Monte Police Department headquarters, and it grew throughout the morning Wednesday. Condolences poured in from police and fire agencies.

“My deepest condolences and prayers go out to the @elmontepolice and the loved ones of the two officers who were senselessly murdered this evening in the line of duty,” Sheriff Alex Villanueva tweeted.

A tweet from the Los Angeles County Fire Department read, “We are deeply saddened to hear of the passing of two El Monte Police Dept officers. The LACoFD extends its condolences/prayers to everyone affected.

“Every day, we work side-by-side w/law enforcement, including our partners at El Monte Police Dept, who are like family to us.”

At around 11:10 p.m. Tuesday a police procession began from the El Monte Police Department to the hospital in order to escort the officers’ bodies to the Los Angeles County Coroner’s office.

The shooting came one day after a California Highway Patrol officer was shot multiple times during a traffic stop in Studio City. That officer was expected to survive, and a suspect in the shooting was arrested after an hours- long manhunt.

The Peace Officers Research Association of California, or PORAC, established a fundraising campaign on behalf of the officers’ families. The fundraiser can be found at https://porac.org/fundraiser/el-monte-police- officers/.

Anyone with information about the El Monte shooting was encouraged to call the Sheriff’s Homicide Bureau at 323-890-5500. Anonymous calls can be made to 800-222-TIPS.