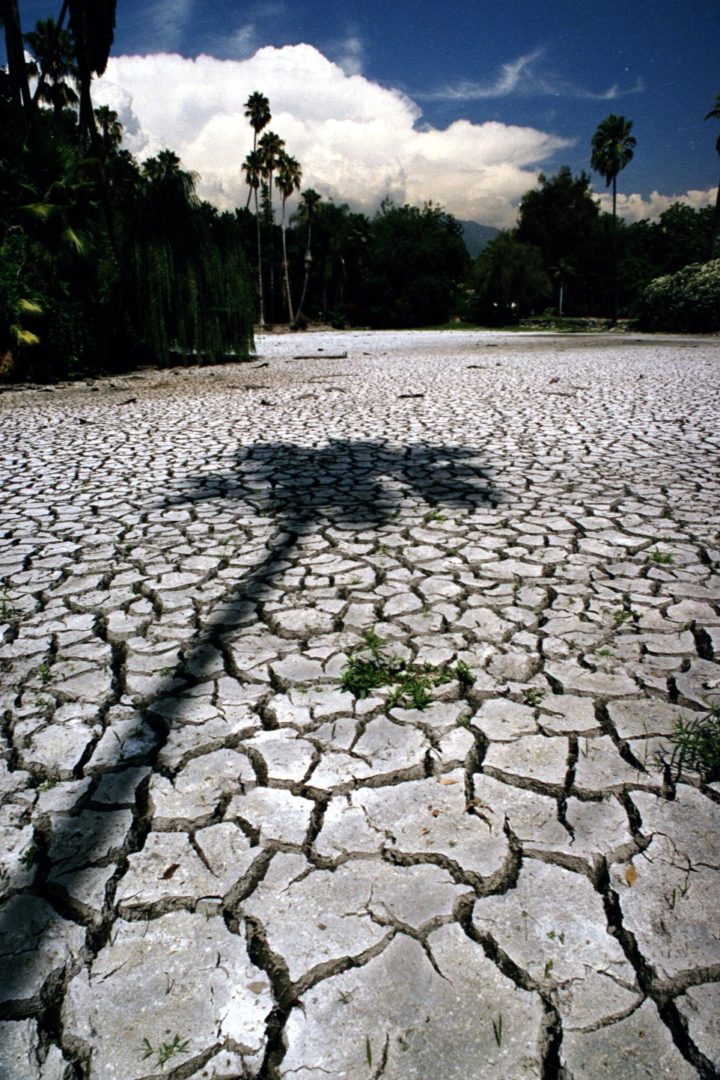 According to the Environmental Protection Agency, “Large portions of the Southwest have experienced drought conditions since weekly Drought Monitor records began in 2000.” | File phot by Terry Miller / Hey SoCal
by Terry Miller
share with

In California we’ve seen fires but alas very little rain, to paraphrase James Taylor’s 1970 folk-rock song. In fact, we’ve seen the level of water in our reservoirs, lakes and dams fall to dangerous levels each year and our wildland fires have been of “biblical proportions.”

With California facing the inaugural heatwave of the season this week, authorities in the greater Los Angeles area are in full preparation mode in case of area wildfires.

The increased heat we are now experiencing, drought, and megafires are all linked to climate change. Declining water supply, reduced agricultural yields, health impacts in cities due to heat, and flooding and erosion in coastal areas are additional concerns, scientists have been telling us for years.

Each year, it seems, we get less rain and the catastrophic California wildfires grow not only in acreage but also in intensity and unpredictability. With climate change, the odds of worsening drought, especially in the U.S. Southwest, are increasing in the decades ahead, according to the Center for Climate and Energy Solutions.

“Warmer temperatures can enhance evaporation from soil, making periods with low precipitation drier [than] they would be in cooler conditions. Droughts can persist through a ‘positive feedback,’ where very dry soils and diminished plant cover can further suppress rainfall in an already dry area. A changing climate can also alter atmospheric rivers (narrow streams of moisture transported in the atmosphere), which can especially disrupt precipitation patterns in the Western United States. A combination of shifting atmospheric rivers and warmer temperatures can also affect Western snowpack and melt, potentially decimating the water supply,” explain scientists at the Center for Climate and Energy Solutions.

As of Tuesday, Lake Oroville — an important reservoir that helps water crops — was at 35% capacity, 43% of the historical average for the same date. Jay Lund, co-director of the Center for Watershed Sciences at the University of California-Davis, told ABC News that California’s reservoirs are 50% lower than they should be this time of year.

The entire state of California is experiencing some type of drought level, the majority under “extreme” or “exceptional” conditions. Last month, Gov. Gavin Newsom declared a drought emergency in 41 of the state’s 58 counties. Warm temperatures in April and May accelerated the rate of snow melt which meant that much of the snowpack seeped into the earth rather than flowing into reservoirs. “Warming temperatures also prompted water diverters below the dams to withdraw their water much earlier and in greater volumes than typical even in other recent critically dry years,” according to a news release at the time. “These factors reduced expected water supplies by more than 500,000 acre feet, enough to supply up to one million households with water for a year.”

California just experienced the third driest year on record which left behind a lot of dry vegetation which serves as an accelerant for wildfires.

“We’re paying the price for that decade-long drought we had over the last 15 years or so,” according to Cal Fire Battalion Chief Jon Heggie told ABC News. “When you have that extended period of drought a lot of vegetation died. And once it’s dead, it never comes back, and that vegetation still exists throughout California.”

Heggie, a specialist in how fire behaves, said the number of fires the state has season so far this year “is a huge increase compared to where we were last year, and as we know, last year was a very devastating fire season.” He warns that the state is shaping up to “have a very busy fire season.”

That is perhaps an understatement. As of June 15, Cal Fire had reported 3,432 incidents this year, burning over 19,000 acres. By June 1, Cal Fire saw more than four times the acres burned than they saw by the same time last year.

Joshua Tree National Park managers last week closed the 49 Palms Trail to allow bighorn sheep undisturbed access to surface water. The park is under extreme drought conditions and herds in the area are increasingly reliant on the oasis spring to survive the hot summer months. The closure will remain in place until “summer monsoons” provide adequate rainfall to increase water availability. Park wildlife biologists will be monitoring the situation closely, according to a press release dated June 11, 2021. Environment Jul 13, 2021
share with
Air quality post-4th of July reported as ‘worst in the region’ since Bobcat Fire by City News Staff
More
Looks like you're using an adblocker